Eating disorders have been called a lot of things over the years, ranging from attention-seeking behaviors to insecurities, to mental health problems. What hasn’t been given as much consideration is how eating disorders relate to addiction.

What is an addictive behavior?

When many people think of addiction, they immediately think of substance addiction – addiction to drugs or alcohol – that leads to chemical dependency. There’s a whole sub-field of non-chemical addictions, however, that are known as behavioral addictions.

Addiction is defined by the American Society of Addiction Medicine as the memory of previous exposure to rewards that leads to a biological and behavioral response to external cues. Those rewards could be anything – food, drugs, sex, television, you name it. Anything that causes you to develop such a pleasant memory of its enjoyment that you will begin to develop cravings and become uncomfortable without that reward can be an addiction.

The behavior is considered addictive when the person involved is willing to sacrifice quality of life to continue engaging in the behavior. This could manifest as problems at home or in their social life, difficulties maintaining employment, financial problems, and many other things.

In fact, you can take some of the wording from the DSM-V which defines substance use disorder (drug addiction) and reconsider the implications for people with eating disorders, and much of the information remains the same.

You get the idea. These are all generally considered indicators of any sort of addiction.

You might think, at first, that this applies only to eating disorders that involve overindulgence. This isn’t true, however.

The brain wires itself to associate rewards with anything that you deem is pleasurable. These reward pathways are typically activated when you have sex, accomplish something, receive a compliment – or eat your favorite food. This is natural.

Unfortunately, this natural mechanism can easily be abused. If you like something, you’re bound to do it again, and as you do it again and again, your brain becomes desensitized to the type of reward being received. So how does this work in the case of eating disorders like anorexia or bulimia? 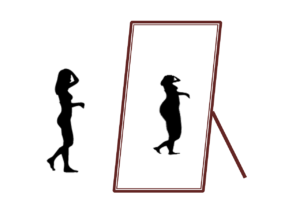 For an anorexic, it’s likely that they become attached to the feeling of being hungry. An anorexic person suffers from a distorted body image and thinks that they’re way bigger than they are; feeling hungry will make them feel comforted as if they’re on a path to losing more weight.

Furthermore, as the body starves itself, it reduces the production of serotonin. This biological mechanism can actually contribute to reduced anxiety.

A bulimic person forcibly makes themselves vomit after eating a meal. The gratification of this can cause chemical cascades in the brain that mimic the changes that any other type of addict experiences when they engage in their addictive behavior.

Overeating disorders are a lot easier to recognize as addictions because they involve the consumption of food, not the avoidance or expulsion of food. Some foods actually cause biological responses as a result of their nutritional profile. For example, foods very high in carbohydrates can provide a person with energy that will eventually lead them to a crash.

Maintaining or treating an eating disorder

The basic, underlying factors of an eating disorder involve the individual rationalizing and justifying behaviors that they know aren’t healthy. This means that they’re willing to go far out of their way, and often against their morals (by doing uncharacteristic things like lying or stealing) to get what they need.

If you or someone you care about is worried that an eating disorder may be developing, you should seek treatment for it. This can be done through traditional rehabilitation methods; for example, the 12-Step program, as used by Alcoholics Anonymous, is also used in the group Overeaters Anonymous. Eating Disorders Anonymous and Anorexia Anonymous are two more out of many support groups that aim to help individuals.